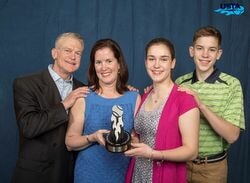 WHITE PLAINS, N.Y., March 27, 2017 – The United States Tennis Association (USTA) today announce that it presented the Charles Norman family of Aurora, Ohio, with the Ralph W. Westcott USTA Family of the Year Award. The award was presented during the USTA Annual Meeting and Conference, which was held March 24-27, at the JW Marriott Orlando Grande Lakes Resort in Orlando, Fla. Created by the USTA in 1965, the award is presented annually to a family of USTA members who play, participate and volunteer time to promote amateur tennis, emphasizing the theme that tennis is a family game.

Charles Norman is a former Indiana State University four-year scholarship player who won multiple USTA Midwest Section titles as a top-level junior in the 1970s. He volunteers as a board member with the NEOTA.  Chuck has remained active in USTA Leagues, playing out of the Chagrin Valley Athletic Club in Chagrin Falls.

Norman’s wife Mary has been an active tennis volunteer for many years, and has served as a USTA League captain and player. The Norman children, Irene (age 17) and Chas (age 15), have been active USTA junior tournament players and have served as volunteer ball persons for the USTA Pro Circuit Ladies Cleveland Open Championships, The Fed Cup as well as the National Senior Games in Cleveland and the Western & Southern Open in Cincinnati.

Check out a great video about Norman's and see their interview and acceptance of the award.

“Thank you to all our friends at Chagrin Valley Athletic Club for supporting us in our love of tennis. This is a great honor”, the Normans.